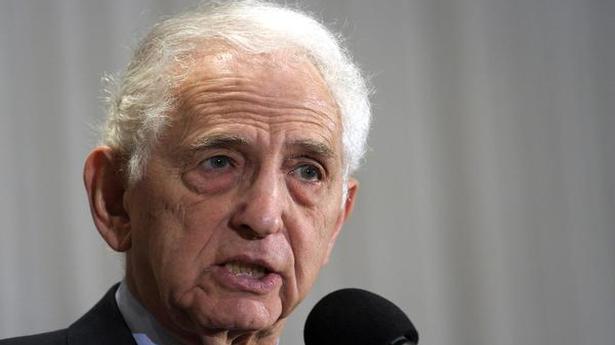 Daniel Ellsberg, one of the most famous whistleblowers in living memory, came to the defence of WikiLeaks founder Julian Assange on Wednesday in his legal fight to avoid extradition to the United States from Britain, arguing that the pair had “very comparable political opinions.”

The 89-year-old, who is widely credited for helping to bring about an end to the Vietnam War through his leaking of the so-called Pentagon Papers in 1971, told London’s Central Criminal Court via a video link that there are echoes of his experience in the way Mr. Assange is being treated by the U.S. government.

The cables relating to the wars in Afghanistan and Iraq that WikiLeaks published had shown, he said, that torture had become “normalized.”

“The American public needed urgently to know what was being done routinely in their name, and there was no other way for them to learn it than by unauthorized disclosure,” he said in his written testimony.

“I observe the closest of similarities to the position I faced, where the exposure of illegality and criminal acts institutionally and by individuals was intended to be crushed by the administration carrying out those illegalities,” he added.

U.S. prosecutors have indicted the 49-year-old Mr. Assange on 17 espionage charges, and one of computer misuse, over WikiLeaks’ publication of secret U.S. military documents a decade ago, largely around the wars in Afghanistan and Iraq a decade ago. The dump, similarly coordinated at various stages with some of the world’s leading newspapers, was arguably the biggest single leak since the Pentagon Papers four decades before. The charges carry a maximum sentence of 175 years in prison.

You Must Read This :  Agartala-Akhaura rail link to be completed by March 2021

Opinion | Standing up for Julian Assange

Like Mr. Assange, Mr. Ellsberg faced the prospect of decades, at least, in prison.

After leaking over 7,000 pages of classified documents to the press, including The New York Times and The Washington Post, Mr. Ellsberg was put on trial on 12 charges in connection with violations of the Espionage Act. They were punishable by up to 115 years in prison, but the charges were dismissed in 1973 because of government misconduct against him.

Mr. Ellsberg, who had worked at both the State Department and the Pentagon, said Mr. Assange won’t be able to provide a justification for his actions if he were to be extradited to the U.S. in the same way that he was denied the chance to raise a public interest defense for his leaking of the Pentagon Papers.

Pressed repeatedly by James Lewis, a lawyer acting on behalf of the U.S. government, about the consequences of the leaking of unredacted documents, Ellsberg said there was “zero evidence” that the actions of Assange and WikiLeaks had led to anyone being harmed. He also said that Mr. Assange took great care not to willfully expose anyone to harm.

While noting the “understandable anxiety” of those revealed to have helped out the U.S., he said any threats had to be “put into context.” He told the court that the wars in Afghanistan and Iraq had made refugees of millions as well as to the death of over 1 million people.

Mr. Ellsberg said it is “extremely cynical” for the U.S. government to feign concerns when it had spent much of the past 19 years showing “contempt.”

You Must Read This :  Kamala Harris, Hillary Clinton rake up $6 million in fundraiser

Mr. Ellsberg’s testimony was interrupted by an outburst from Mr. Assange in the dock before the Australian was silenced by the judge, Vanessa Baraitser.

Mr. Assange’s lawyers say the prosecution is politically motivated and that he won’t receive a fair trial in the United States. They also argue that the conditions he would face in prison would breach his human rights.

Mr. Assange has been in a British prison since he was ejected from his refuge at the Ecuadorian Embassy in London in April 2019. The extradition hearing is due to last until early October.