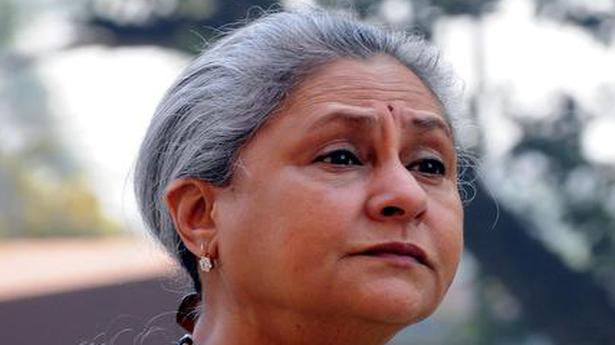 Just because of a few people, you cannot tarnish the whole industry, the MP says in reference to late Sushant Singh case

In the wake of Hindi film actor Sushant Singh Rajput’s suicide and subsequent arrest of his girlfriend Rhea Chakraborty over involvement in an alleged drug racket, which has dominated news channels over the past many weeks now, Samajwadi Party MP Jaya Bachchan said that the film industry was being “flogged” to “divert attention” from the depressing financial situation.

Ms. Bachchan, speaking during the Zero Hour in which Parliamentarians can raise issues of national importance, said that the film industry employs 5 lakh people daily and indirectly employs 5 million people. “At a time when the financial situation is in a depressing state and employment is at the worst level, in order to divert the attention of the people, we are being flogged by the social media,” she said. Ms. Bachchan also said that this was happening with support from the government.

She also sharply rebutted Bharatiya Janata Party (BJP) Lok Sabha MP Ravi Kishan’s statement made in Lok Sabha on Monday. Mr. Kishan, who is a popular actor in Bhojpuri films and has acted in few the Hindi films, raised in Parliament the drugs-related allegations that have emerged against the film industry in the Sushant Singh Rajput death case investigation. He alleged a “conspiracy” by Pakistan and China to destroy the country’s younger citizens.

“Just because of a few people, you cannot tarnish the whole industry… I was really embarrassed and ashamed that yesterday, one of our members in the Lok Sabha, who is from the industry, spoke against the film industry,” Ms. Bachchan said. She said that people in the entertainment industry were some of the highest taxpayers and yet they are being harassed.

She exhorted the government to stand by the entertainment industry, which she said has always come forward to help, be it in the form of monetary help or to raise awareness. “It is very, very important that the government supports this industry and not kill it,” she added.

You Must Read This :  Parliament proceedings live | Defence Minister to address Lok Sabha on border row